Adenocarcinoma of the Colon 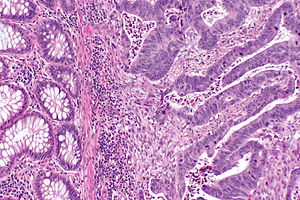 The symptoms of adenocarcinoma of the colon are very similar to those of other types of cancer, but they can vary in intensity depending on the location of the tumor, the stage of the disease, and whether it has spread to other parts of the body. Patients with colorectal cancer are usually diagnosed in their late stages. The tumor will usually be in the right-hand side of the colon, although in rare cases, the tumor will develop in the left-hand side of the colon. The space inside the colon is huge and the wall is thin, so that material that passes through it is mostly liquid. Some cancers may be felt from the outside of the body, but the pain associated with them is often not noticeable. In some cases, a person suffering from colorectal adenocarcinoma may feel weakness due to anemia.

The most common type of colon tumor is adenocarcinoma, and it bears a poor prognosis. Because the cancer is so rapidly growing and usually presents at an advanced stage, the patient has an extremely poor survival rate. Fortunately, most patients will survive their cancer, and the majority of them will have a five-year overall survival rate of 12% or better. However, in pediatric patients, the survival rate is lower, and most cases present in an advanced stage.

One recent case report described a 77-year-old man with abdominal pain. A total colonoscopy showed a highly elevated lesion, 30 mm in diameter, in the transverse colon. The lesion had a sharply raised edge, and a bridging fold. The lesion was visualized with an indigo-carmine dye. The cytology of the mass was consistent with an adenocarcinoma, with the tumor invading the submucosal layer.

An 77-year-old man was diagnosed with adenocarcinoma of the colon after experiencing abdominal pain for several months. A total colonoscopy revealed a mass with a sharply raised edge. The tumor was compared to a submucosal tumor and had a bridging fold. The mass was stained with indigo-carmine, which was a colorless pigment that gave a characteristic orange-red color.

The patient had a stenotic mass in the long segment. The endoscope could not pass the mass. Multiple biopsies were taken, adenocarcinoma of the colon was found. The tumor was characterized by a pronounced gray-white color and a prominent bridging fold. The lesion was found to be a submucosal adenocarcinoma of collagen.

A 41-year-old man with abdominal pain presented with diarrhea and rectal bleeding. A total colonoscopy revealed a 30 mm-diameter mass in the transverse colon. The lesion had a sharp edge and a bridging fold. The tumor was characterized by a contrasting pattern of mucosa. The tissue sample was a high-grade adenocarcinoma.

A 77-year-old man presented with abdominal pain and rectal bleeding. A total colonoscopy revealed a 30-mm-diameter mass in the transverse colon. His biopsy revealed a highly elevated adenocarcinoma of the colon with a bridging fold. The lesion’s margins were free of the tumor. The patient had one episode of abdominal obstruction during the course of chemotherapy.

A 41-year-old woman with abdominal pain and adenocarcinoma of the colon was diagnosed by colonoscopy. The resected specimen revealed a high-grade adenocarcinoma with a single strand of reddish irregular mucosa at the top of the lesion. Despite the presence of this tumor in the upper rectum, the tumor was well-differentiated adenocarcinoma with dense lymphocytic infiltration of the overlying mucosa.

A 77-year-old man presented with abdominal discomfort and a stenotic mass in the transverse colon. A total colonoscopy showed a 30 mm-diameter highly elevated lesion. Its appearance was similar to a submucosal tumor. The lesion’s edges and bridging fold were elevated. The tumor’s margins were free of tumor cells. During chemotherapy, the patient complained of chest and abdominal pain. He is still being evaluated for signs of spread of the tumor.